The RANBUILD® story began in 1949, when Neil Stratham founded R&N Trading Co. (as the company was originally called) and began manufacturing steel buildings at a facility in Newcastle. In those early days, the business was focused primarily on the agricultural sector.

Throughout the 1960s, the company expanded both in terms of facilities and employees. Then in the 1970’s, RANBUILD® sheds began to be distributed as far afield as the Middle East. This represented the beginnings of our international reach, and our sheds are now strongly embedded in Thailand, Indonesia, Vietnam, Malaysia and Myanmar.

This type of success continued over the years and, by 1994, RANBUILD® had moved to a distributor model and appointed resellers across Australia. Then in 2005, the company was acquired by Lysaght, a wholly owned subsidiary of BlueScope and a trusted presence in the steel industry for more than 150 years.

Proudly a part of Lysaght and a division of BlueScope, we are able to take full advantage of the iconic range of LYSAGHT® steel building products and our service offer is one and the same. Lysaght is ‘the trusted experience in steel ‘ and their promise is our promise. RANBUILD® customers can rest assured that every shed we manufacture features 100% Australian-made products and premium brands like LYSAGHT CUSTOM ORB®, LYSAGHT TRIMDEK®, and LYSAGHT® Cee sections and purlins; products that not only hold a special significance in Australia’s industrial history, but have continued to prove themselves over time as being of the highest quality available. 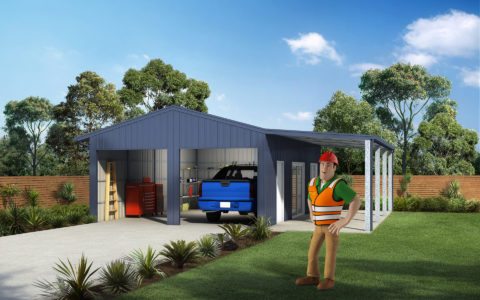 See our most popular range of single, double, triple garages, carports and more.

Ranbuild’s new Shed Builder app allows you to create and customise your own shed or garage in 3D.